last night, she sat straight up (let out a little yelp), and realized it was the 19th of august..wow, two days earlier must have been….AUGUST 17TH!!!!  my six month ampuversary!!!  where were the balloons, the ice cream, the cheese, the scary clown..(0k, scratch the clown).

and, if that wasn’t enough good news… charon’s surgeon dr. mancini (no, not henry) called today to say the lymph nodes were all clear and the margins were clean!!  after she’s all healed up, a month or so of radiation and she’ll be good as new.

bring on the ice cream and cheese – everybody do the ‘hokie pokie’ we’re gonna party down tonight!!!

gayle, the lucky one

how many times have i said…gayle’s the teacher in this adventure.  i can’t even begin to list all the things she’s taught me through her diagnosis, her amputation, her chemo, through every day i am privileged to spend with her.  gayle has taught me:

so where is this leading…well, a month ago i too got that awful diagnosis of cancer, just like gayle.  fortunately, the prognosis is very good, and after my surgery tomorrow, and follow up radiation this fall…i’m gonna be just dandy…i gotta be, cause there’s no way this nasty disease is gonna separate me from my sisters – NO WAY!!

everyday, i see strength, hope and joy from all the tripawd brothers and sisters.  they live in the moment, and capture every drop of goodness from each one.  sadly, some of our brothers and sisters pass way to soon, but time is not the true measure of love, is it…

i’ll check in after the surgery (if nurse gayle, nurse jane and male nurse murphy let me use the computer).  no worries..i’m in the best hands possible!!

well, not that i’m shy, but somehow my buddy comet got hold of some of my pictures, and she made me a star!!  and if that wasn’t enough, she made my sister jane a star too!!  i’m ready for my close-up mr. demille….  i’m nominating comet for an academy award!!!  get out your tuxedos and ball gowns, this calls for a celebration.  enjoy!!

just a quick post to show off the present i received from wyatt….how did he know that yellow was such a good color for me???  all hail the ker-chief!! 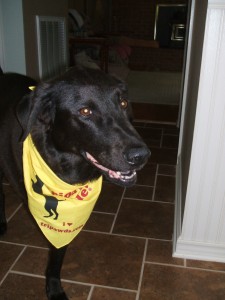