it pains my heart to say my beautiful sister jane, has passed on.  she lived a wonderful fifteen years – i’ve known her my entire life.  not a day went by where we weren’t together, and now…well it will take some getting used to for sure.  although her spirit was strong, jane’s body was failing, and she was ready to move on to another great adventure.  i just know there will be a time when i see her spark, in another’s eye, and i’ll know she lives again.  love never ends.

here’s a video our charon made from some of jane’s pictures.  the song is sung by kathy chiavola – ‘Senza Parole’ from her cd, ‘From Where I Stand’..another keeper.

today marks the one year anniversary of gayle’s amputation.  every day we have shared has been a blessing.  challenges – we’ve had more than a few…but all in all, gayle has made this year the best i can remember.

to recognize the life we share, i’ve made a photo video for gayle.  the music is an everly brothers cover by a friend and fellow cancer survivor, dede wyland.  her cd ‘keep the light on’ should be in everyone’s collection.  enjoy.

what a great day to be me.  jane and i got a wonderful acupuncture treatment from our favorite acupuncturist, dr. mili bass, and then home to take a nice nap.  oh, and not to forget…..today is my ten month ampuversary!!!!!  ten, double digits, going binary baby, ‘bo derek’….  it’s all good.

geesh…there are a zillion calendars and clocks in this house…you’d think a human could keep up….  but, the best thing is to just forgive her, she is just not quite herself lately…

yes, folks….yesterday, november 17th, was my NINE MONTH ampuversary!!!!!!!   we did get a nibble of oatmeal cookie and some extra honest kitchen, but i don’t think that’s a celebration.  maybe some cheese and ice cream???  there have been extra naps and snuggles, so that will have to do for now…

oohh geesh, i can hear charon coming in the driveway – she’s back from her FINAL radiation treatment today!!!  no more going to get ‘zapped’ every afternoon, interrupting our time together and my naps!!!  charon said it wasn’t nearly as scary and awful as she imagined, cause the radiation techs and her radiation oncology doctor (dr. robert bertoli) were just so kind and caring.  kinda like my vet, dr. moser, is i guess.  i’m thinking it wasn’t nearly as scary cause she saw me being all brave about surgery and chemo, and i gave her the strength to ‘get it done’!!!

although she’s seems to still be tired to me, she’s already making a list of all the stuff that needs to get done now that she has full days…clear out the garden, get rid of leaves, paint the bathroom, clean the flower beds, make more juju socks (ooh, she made a pair for dr. bertoli that were ‘pittsburg steeler houndstooth…sweet), clean the carpet, split wood…..the list is ENDLESS!!!!

wait a minute, she just wrote something on the top of the list – ‘more time with gayle, jane and the kitties’!!!   now that’s a list i like!  i am so happy, i think we need to celebrate with a nap!!!

geesh, i’m a winner!!  here’s my story – must say i make a good looking vampire!!!  big thanks to dr. nancy kay for picking me to be one of her winners!!!

just a quick note before my evening nap…today is my eight month ampuversary, and i am doing great.  this has been a hectic week, but i’m sure i’ll catch up on my zzzz’s in the next couple of days.  here’s to ice cream, cheese, and puppy dreams!!!

usually, jane and i find it our duty to bark at the deliver dudes – i mean really…they are entering our space, depositing ‘unknown items’ and skedaddling off… but this week, i think i might be changing my mind about these folks…

tuesday, we go for our acupuncture appointments at 5:30 PM..kinda late, but we know sometimes it’s not always about ‘our schedule’…so, when we get back, oh my, the UPS dude has left another item on the front porch…but, wait..it’s addressed to ME!!!  a package for ME!!! geesh….  so, when charon finally got it open, it was amazing – my friend ginger and her folk in the ‘land of lincoln’ (all hail the chief) had sent treats for me and jane and also ‘treats’ for don and charon. 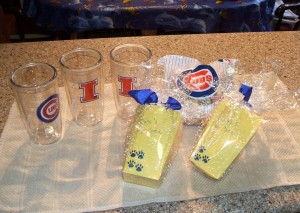 well, you’d think it was christmas for don…being a transplanted illini (is that a kind of bush???) stuck in all this tennessee orange, he was beside himself with the ‘big i’ and ‘cubs’ goodies – then he started talking about trying them out with golf…i don’t get what a ‘canadian club’ is, but he said it would work perfectly in one of the glasses…

anyway, the treats for us girls were mega-delicious  pup corn.  i gobble so fast, that charon couldn’t get a picture of me inhaling my piece, but jane is a more ‘dainty’ eater, geesh… 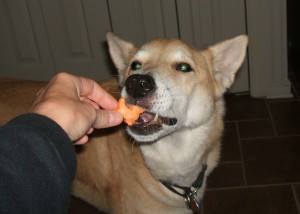 so, what a tuesday – but that’s not all!!!!  wednesday rolls around, i’m napping in the library, keeping one eye on the traffic going by.  geesh again, here come the mailman…and he’s leaving a parcel…ugh….but, what, AGAIN????  this one is addressed to ME AND JANE.  oh my, i think we’ve doubled up!!!!  so, charon took way too long to open the package, but how wonderful – we got quilts from Granny Kay in Texas!!!!

(Granny Kay is comet’s grandma, who makes puppy blankets – seems charon and granny kay worked out some kind of ‘artists’ barter’ and they exchanged socks for quilts… geesh, this is great, wonder what other great stuff she could barter for with those socks…hum, i need to put my thinking cap on…)  but, i’m rambling…

so, charon took the quilts out of the box, and we were all amazed.  jane’s is so dainty and lacy, just perfect for the little princess that she is.  here she is resting next to me: 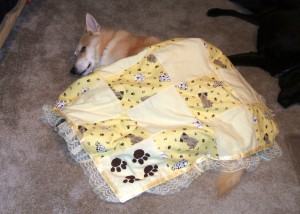 and my quilt – well, let’s just say granny kay hit one out of the park.  it’s navy with pink polka dots, and pink squares.  my quilt is girlie and brave at the same time.  the pink reminds me that charon and i are both kicking cancer’s butt.  geesh, am i a good looking girl or what?? 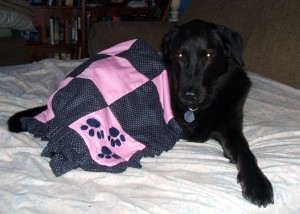 well, all i can say is thank you so much to ginger, annie, brian and granny kay.  you guys sure know how to make a girl feel special!!  and thanks to comet for brokering the barter, you are one smart cookie yourself!!  geesh, i sure am the lucky one!!! 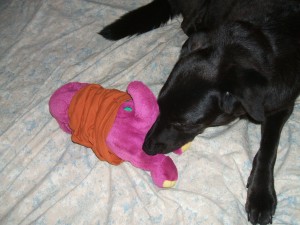 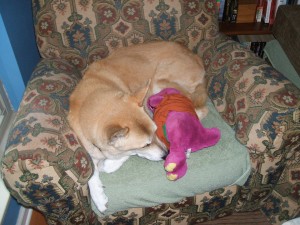 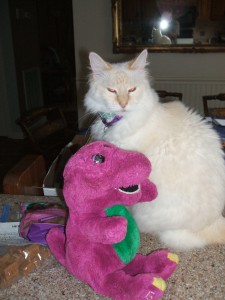 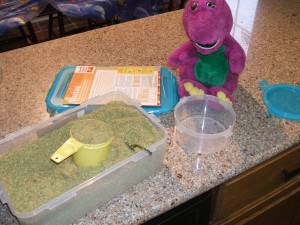 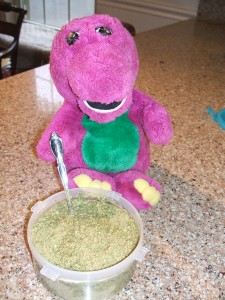 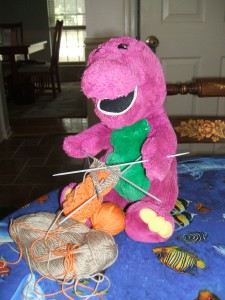 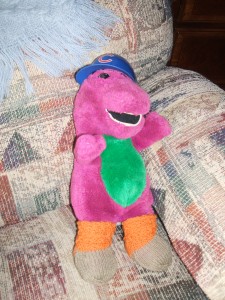 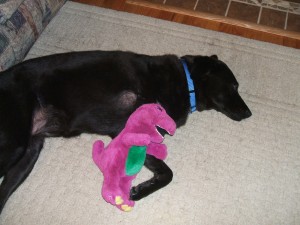 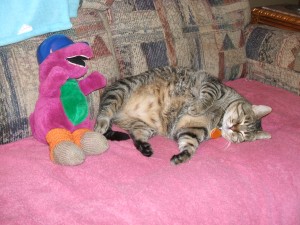 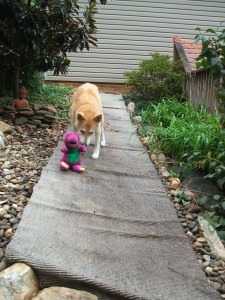 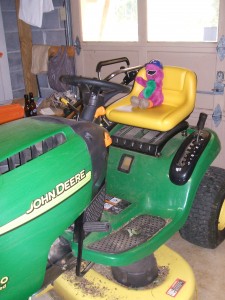 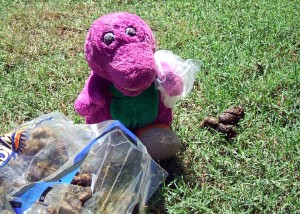 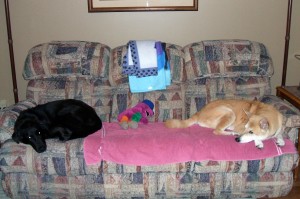